BZC and our contractor have recently completed the upgrade to the kitchen and bathroom of 1929A, where Ken and Katy live (and the sesshin servers often eat). It’s almost expected that construction projects will take longer than expected, and this was no exception — work started in August 2015, and though Ken and Katy were able to move back in in April 2016, final inspection was not completed until July. Improvements included removing an unused vent cavity from the kitchen below (gaining roughly 10 square feet to the room), new flooring, all new kitchen cabinets, a new energy-efficient fridge, and new lighting. We reused the range and the water heater, both of which were in good shape. The bathroom was remodeled to locate the more commonly used public functions (the sink and toilet) closer to the door, while putting in all new floor and wall tile and new fixtures. 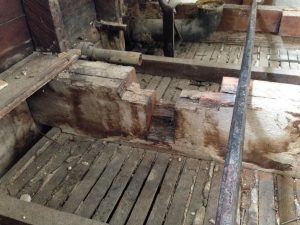 Of course, no renovation is without its surprises, and ours included the discovery that the floor joists were spaced too far apart and had been notched out for plumbing, rendering their structural capacity seriously below code. A number of exterior wall studs had also been cut for utilities, similarly weakening their capacity. We reinforced both floor joists and wall studs to bring them up to strength and added insulation and waterproofing in the process. We also discovered dangerously unprotected wiring under the flooring in the attic, which constituted a significant fire hazard. That wiring was replaced. Some of the most important work that was accomplished, which significantly improved the structural integrity and safety of the building, is now performing its function invisible to the eye.

While most of the work for a project of this scale is most efficiently done by a contractor, we did some of the work ourselves. Shelley Brock did the initial design work. Ken Powelson managed the project, sourcing many of the materials and searching out more cost-effective options. Access panels were rebuilt during work day. Walter Kieser made the shower rods in the bathroom, and Ken made the towel racks. Henry Herndon wired up all our smoke detectors to meet code for our final inspection. 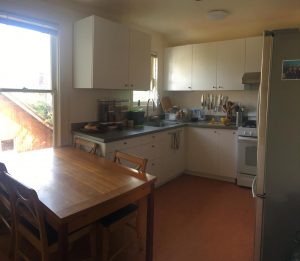 We will be offering guided tours of 1929A at our all-sangha fundraising party on Saturday, September 24, so you’ll be able to see the completed construction (in case you missed the impromptu tour held after a semi-recent Saturday program). Come check it out!

Many thanks to the Building Committee members — Ross Blum, Shelley Brock, Mary Duryee (point person), Walter Kieser, Ken Powelson, and Ron Nestor — who helped plan and carry out the renovation project, and to Ken in particular for shepherding the whole project from beginning to end. The project went much longer than expected (9+ months to the point of the apartment being habitable, and closing in on 12 months to button up final details). This amounted to a “second job” on top of Ken’s employment and residency schedule. His steady attention to detail and patience were evident and much needed. Special thanks to both Katy and Ken for their good-natured flexibility and endurance during the time they lived out of suitcases — in so many different locations that they lost exact count (but somewhere between 8 and 9 places in as many months) — and to sangha members Lisa Nelbach, Jed Appelman, Linda Hess, Laurie and Hozan for opening their homes to Ken and Katy while they were itinerant. This was a moving expression of the treasure of sangha.