When I filled out the practice period application, I noticed the option to help serve dinner at the Men’s Shelter. Although I had served once years ago at the shelter, I had never helped prepare the
meal. So, I spoke to Laurie about it, signed up on the community room porch bulletin board and  showed up on Center Street on May 8 a little before 5pm. I was early and had some time to hang out
on the street a half block from city hall, across the park from my old alma mater, Berkeley High,  and a few doors from the Veteran’s Hall.

Laurie arrived at 5pm with a load of food that Don had purchased earlier from Costco and we helped  bring in food. Several long-time stalwarts prepared lemonade and set up the serving tables for 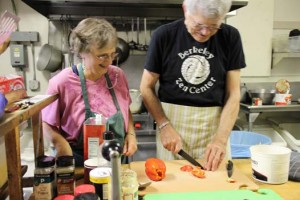 buffet. Folks were washing dishes, locating tools and some of us pitched in to wash and cut up potatoes, prepare salad, portion out chicken into baking/serving pans. I learned by watching how to
mash cooked potatoes with the skins on, add a quart of 2% milk and a cube of butter. Delicious.

In the freezer, Laurie discovered ice cream from a previous dinner that could go with the Trader  Joe blondies which I had overbaked a bit… some of the men don’t have good teeth, so soft is better.

After serving the line of men who thanked us and told us frequently how good the food was, I filled a plate with food and joined some of them at a table. One man asked about Buddhism and where we were located. Laurie invited him to a zazen orientation at 8:45am on Saturdays. Another man told  me he had lost his small business when he got sick and ended up at the shelter. The third man was not able or willing to engage in conversation  and left after he finished his meal and before dessert. Men can stay for 30 days, have to leave
each day by 7am and return at night for dinner and bed. You can see some of the dorm area from the  dining hall.

It is a good space to be in and the more hands make the work lighter. I was glad to see more  volunteers show up for serving and clean-up help. We were all out of there by 8pm.

I’m still thinking about Friday. How can I impact the roots causes of poverty, ill will, and greed? How can my Buddhist practice and my
political practice make a difference? One idea is that you can really help by preparing food, serving, and eating with people. Give it a try and then consider if you can schedule yourself regularly and be one of those who can be counted on to be  there.